Maron and Obama Break Single Day Record For Most Downloads in a Day 725,000 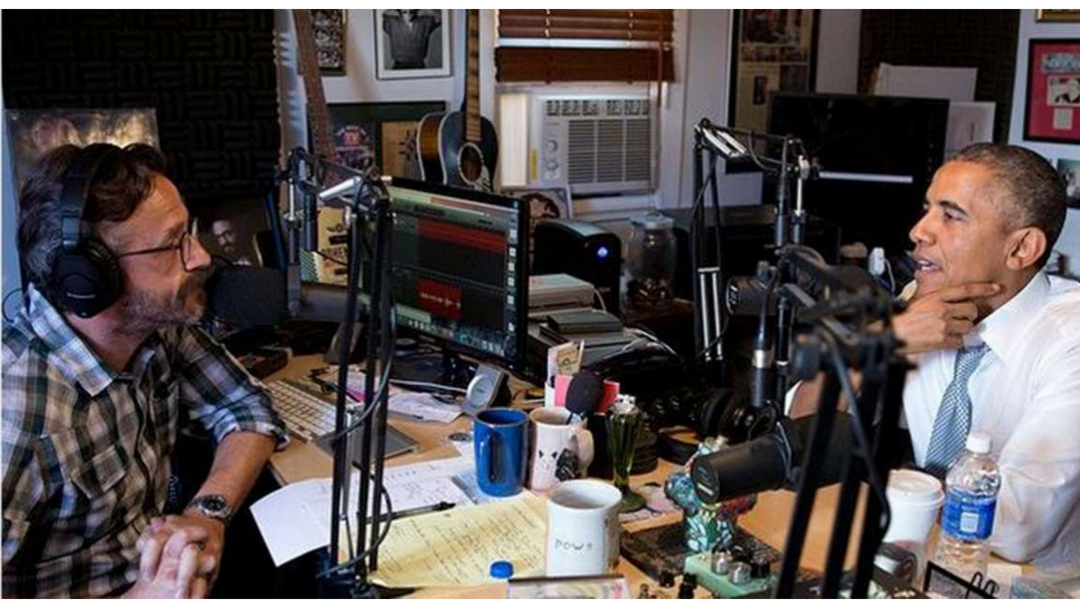 On Monday of this week President Obama was interviewed on the WTF show from Marc Maron (no Marc did not do his traditional f-bomb dropping into). It was a cool interview for many reasons.

It seemed both men were somewhat nervous. The President seemed stoked to be in the garage, and Maron was audibly nervous (who wouldn't) at the beginning of the interview. By the end it seemed like tow dudes having a chat. There was no agenda and bullet points to hit. It made the President very human. According to Libertated Syndication (Libsyn.com) who hosts the files for the WTF podcast, this interview broke the record for the most downloads in a single day. Here is the information from the Libsyn press release.

PITTSBURGH, PA – June 24th, 2015 – Liberated Syndication (Libsyn), a worldwide leader of podcast hosting, distribution and monetization, today announced that download requests on the Libsyn network for the WTF with Marc Maron interview with President Obama reached well over 725,000 in the first 24 hours more than doubling the previous record for the first 24 hours of an episode launch. The episode reached the 1 Million mark in under 48 hours also a record on the Libsyn service. Libsyn congratulates Marc on this historic interview for podcasting and the record breaking numbers on Libsyn.

The interview was a home coming, in more than one way, for the President. The first was his mention that Marc’s garage was just a few miles from where he attended college and the second was a homecoming to Libsyn. Prior to the 2008 presidential election the President had a podcast account on Libsyn during his successful campaign.

“At Libsyn, we are honored that both the President and Marc chose Libsyn as their podcast hosting partner.” stated Rob Walch, Libsyn’s VP of Podcast Relations. “Today we are also extremely proud to provide a world-class podcast hosting solution that was easily able to handle the historic number of requests for the WTF episode of their conversation in Marc’s garage.”

Libsyn continues to be the leading podcast hosting and distribution solution with over 25,000 podcast shows on the Libsyn Network. The results from the past 48 hours punctuate the design philosophy behind the service and demonstrate the scale of the Libsyn Network.

Marc’s interview in his garage with the President of the United States of America validates the cultural importance of podcasting in general and Marc’s show specifically. Marc represents everything that is great about podcasting and we congratulate him on this historic and industry changing interview and for the record breaking number of download requests for this episode.

Liberated Syndication (Libsyn) is the world’s leading podcast hosting network and has been providing publishers with distribution and monetization services since 2004. In 2014 Libsyn delivered over 2.6 Billion downloads. Libsyn hosts over 2.5 Million media files for more than 25,000 podcasts, including typically around 35% of the top 200 podcasts in iTunes. Podcast producers choose Libsyn to measure their audience, deliver popular audio and video episodes, distribute their content through smartphone Apps (iOS, Android and Windows Phone 8), and monetize via premium subscription services and advertising. We are a Pittsburgh based company with a world class team. Visit us on the web at www.libsyn.com.

What was you favorite podcast of 2011?

Amazon S3 Hosting for Podcasts is a Wolf in Sheeps Clothing

Another Great Tool from Paul Colligan