I attended the Podcast Movement event this weekend (PM14). Unlike other events, this was strictly about podcasting. They brought in experts from all over to talk one thing: podcasting.

As this was the first time this event had been held, I had a good idea what to expect – but then again, you never know. The very first impression was the price. Compared to other events, they scored an A+ on price.

I landed at and made my way to the hotel. Nice. This staff was awesome, and signage let me know I was in the right place. As I was part of PM14 I got free Wi-Fi. Very cool. The room was nice (not that it really matters I only sleep there). I was excited as I made my way to where the event would be held.

The “Floor” was filled with vendors setting up their booths and tables. What was cool about this setup, is this was (more or less) a giant hallway. When exited a room where a session was, you were “on the floor” and a few steps away from talking to a vendor. Bathrooms were also just a few steps away.

In my case I forgot to pack my dress shirt, so it was an added bonus that the hotel was connected to a mall and I quickly fixed my problem with a quick shopping trip.

The program let me know I was in for a good weekend. Unlike the photo copied black and white document I've received at other events, this was full color, card stock program that SCREAMED “first class event”. It listed all the speakers, was easy to follow, and served its purpose well.

I've heard good and bad things about Chris Brogan. I've heard people complain that he “abandoned” podcasting and is only podcasting now because of things like Apple's podcasts app making its popularity increase (as apposed to sticking around when there was less audience?). This was the first time I had heard him, and he was funny, direct, and inspiring. Chris was a great way to kick off the event. He talked about things like embracing your individuality. He begged people to quit copying each other (AMEN!). He talked about looking at what is working, what is not, and “killing your babies” (those things that are not impacting your audience). HE shared what has worked for him, and what has not. Chris was there in the early days, and shared some of his insights of why podcasting didn't take off as fast as we had hoped in 2004 and 2005. Chris was a very hard act to follow (and being that I can't say much about the next speaker…..)

As we were all standing in the hallway, it was nice that we didn't have to walk far to go to our sessions. The rooms were nice, with your typical projector screen, water, and chairs.

The organizers have a hard job of choosing speakers. First off, they all operate in our community. This means you put yourself in the position of potentially saying “no” to friends. You also get bombarded with submissions. It's a rough gig, and a salute the PM team for doing a good job. I may be biased, but many of the speakers are my friends. I attended talks by Ray Ortega, Daniel J. Lewis, Erik K. Johnson, Todd Cochran and Tim Paige. They were all filled with really good stuff. I have action items from all of them. I was enjoying Jeff Browns talk until I got an emergency call from home (sorry to leave mid-talk Jeff). Maybe because I don't do a show with him (and wasn't sure what to expect) Tim Paige caught me off guard his presentation I had the longest list of action items. I really felt inspired after watching Tim. Did I attend any “clunkers”? Well there was one session where a panel tried to make their sessions interactive by asking the audience for their ideas on the subject. In my opinion, I flew across the country to hear your opinion. As someone who is in a classroom five days a week I understand that different styles of teaching fit with some, and not with others. For me, it didn't click.

How Did They Do?

For the things they had control over (speakers, hotel, environment, setup and layout) they did an excellent job. For a first time event, it was better than other events I've attended that have been going on for years. A+

If you listen to the Podcast Review Show, you know I feel there is ALWAYS room for improvement (and I include everything I do in that statement). So here are some things that could easily be improved.

I'm not sure what to call these. There was a comedy show, a game show, and other live events during our lunch time, etc. The problem is these were held in the “long hall way – showroom” area and the people on stage were ignored. This was really a bummer. I was privileged to room with Daniel J. Lewis and I got to hear his routine before he delivered it. It was hilarious, and unfortunately the sound system would've had to been set to “Deafening” to grab people's attention.

Solution: Much like the comedy shows at NMX, put them in their own room. Don't make is a small room. If it's the only thing going on, put it in the big room. At NMX the room overflowed. This way those that want to network can network, and those that want to see these side presentations can attend without having to strain to hear them.

I'm not looking for a spot light, but it seemed that all the stages could've moved the dimmer switch up a bit. I could see everything, and I understand this was not PM's issue but the company that was doing all the audio/video, etc. I'm going to be curious to see how the videos come out. This is probably under the category of “nick picking.” It wasn't a true problem, but (for me) the speakers were a bit in the dark.

Solution: Turn up the lights on the stage

They did a GREAT job of having a cool venue (house of blues) and free food (WOA! COOL). They provide transportation (again – nice job).  We all like to have fun, and where there are people and booze there will be loudness. I loved that they had a singer/guitarist (that one would think might be a bit quieter) but in the end we were all straining our voices to talk. This again, this was a party not a networking event. This was held on the evening before the last day (Saturday). This means people (like me) who spoke on Sunday have an audience that is hung over and tired. Now for the record, it doesn't matter if there was an “official” party or not. If we are all in the hotel, the bar will be full. So I'm not sure if we moved the part to the last night of the event if it would make a difference.

Solution? Put the party on the last night of the event (as a sendoff) and let people “Sleep it off” on the plane ride home. I did enjoy the challenge of presenting to people who were tired (and tried to be extra animated to keep people's attention during my presentation).

I would call PM14 a Giant Success, and today I was lucky enough to receive the following email about my presentation:

Just a quick note to congratulate you on your presentation at PM14. I’m not one to give automatic standing ovations or to toss out praise mindlessly, but I really thought your session was one of the top two presentations I attended at the conference. The distinguishing features that I appreciated:

I felt that every minute of your presentation gave me something I could use to better my podcast. 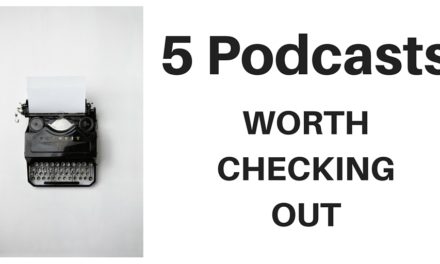 5 Podcasts Worth Checking Out.