One of the best things about podcasting is the producer has the power. Want to do an hour show? Do it. Want to do a 4 minute podcast? Do it. Weekly, monthly, daily? Do it. YOU are in control of YOUR show.

I was reading an article that was an interview with Adam Carolla, and he was asked if he missed radio. To this he said,

I’ve had a couple of chances to get back into radio. A couple of pretty good deals. One pretty lucrative, one very lucrative, and you know, I don’t miss it. I thought I would. I loved radio, and I always looked at it as a great alternative to TV, because it was very real time.

Later he was talking about how radio obsesses over ratings and when things take a turn for the worse, people come in with what they feel will “fix” the show. He mentioned that, “The good news is [on a podcast] you don’t have some buffoon coming in wanting you to do some stupid stuff because the ratings took a dip.” In the case of Corolla's radio show it sounds like they forced him to change co-hosts from Dave Dameshek to Danny Bonaduce.

If you are “tired of working for the man” then start a podcast. You can reach the world for the price of a Nintendo Wii (without having to spend more money on games).

Back From The Dead – TODAY IN PODCASTING

Why I’m Moving From Amazon S3 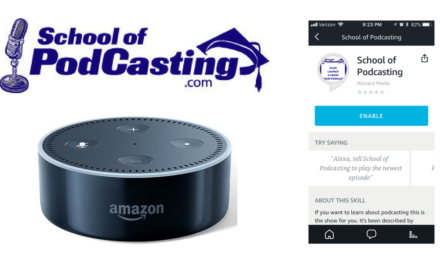 The School of Podcasting is Now On Amazon Alexa Devices