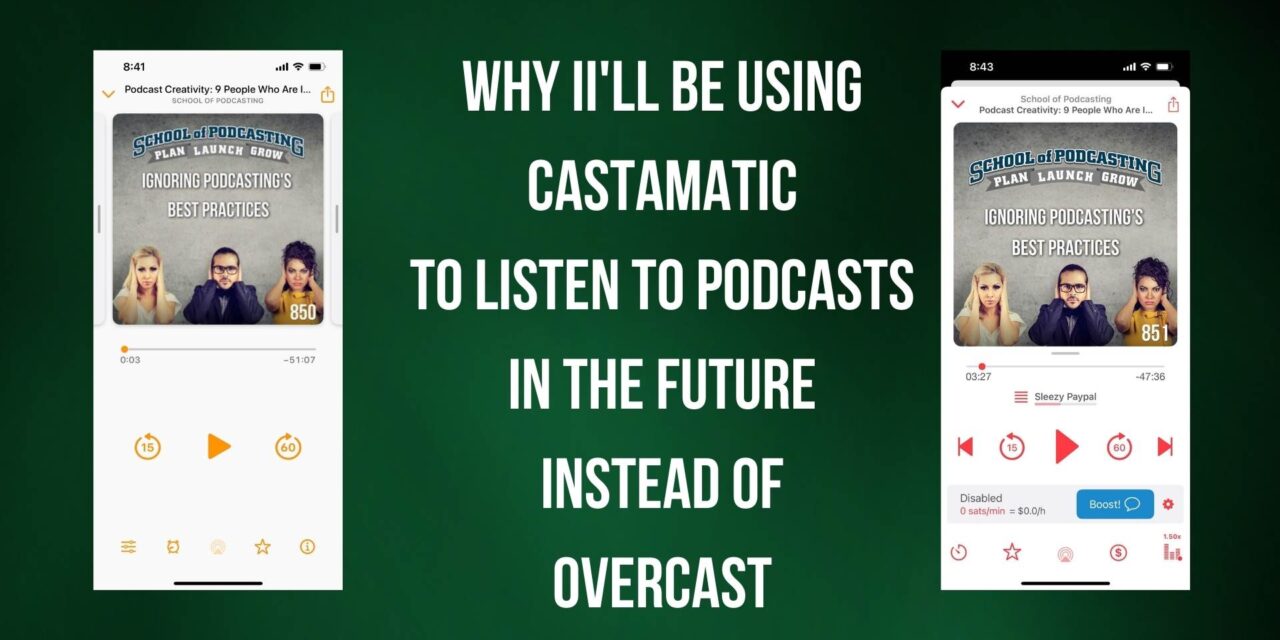 There was a time when we all used Apple Podcasts (probably 2007ish) and one day they broke it. It stayed broken for days. Meanwhile I needed something to listen to podcasts, and someone suggested Overcast.fm and I never looked back. It did everything I wanted.

I can add a SHOW (not an episode) to a playlist and when a new episode comes out it appears in the playlist.

I can set the starting and leaving points, along with the speed, and other features per show. So I might listen at 2X to a show in English, and then the next episode automatically slow down to 1.25 due to a host's accent.

If you paid for a premium version there was a web-based version (very basic) but it enabled me to upload a file and have it come into the app on my phone. This was great for “one off” audio. I also used it every week to upload the episode I was preparing to release so I could listen through earbuds before releasing the episode into the wild.

Strike 1: The Web Version is Going Away

When I logged into Overcast.fm to upload some more files, I saw this https://overcast.fm/webplayerdiscontinuation which explains that the “web version” is going away. As they put it, “I’ve decided to discontinue most of the web player’s functionality in 2023 and focus exclusively on the Overcast app for iPhone, iPad, Apple Watch, and M1/M2-powered Macs.”

Strike 2: No Support For Streaming Bitcoin

If you haven't heard you can now stream bitcoin to your favorite podcasts. That's right. You are directly connected to your favorite hosts. You pay them what you think its worth. ON the Podcasting 2.0 show which highlights the development of enhancements to the RSS Spec, they explained that while Marco from Overcast.fm financially supports their efforts (with large donations on a regular basis) he has stated he would not be adding any streaming bitcoin features into Overcast. I was very disappointed when I heard this as I've always felt Marco was somewhat “anti-advertisement” and this is aligned with that philosophy.

Wait, what happened to Strike 3? Well, I'm holding the door for Overcast. You were my first love, and I don't want to give up on you. However, deep down… I know it is over. It's not you. It's me.

I just bought $25 worth of crypto and put it into Castamatic. I set how much bitcoin I stream to stream per minute per show and whoever catches my eye is who I listen to first. I was able to export my podcasts out of overcast as an OPML file and then import them into Castamatic.

Castamatic works so much like Overcast I was worried they might get sued. It's very close to Overcast:

So with the ability to automatically pay my favorite hosts, and automatically sort my episodes into my playlists, Castamatic is the app to beat in my world.

If you want to setup your show to receive bitcoin, check out this video

If you don't want to use an antiquated app check out www.newpodcastapps.com

The Podbean Experiment Part I

Jay Mohr Joins the Podcasting World – Worth the Listen