If you haven't heard, Podango is gasping for air, and saying the chances of them making it 2009 are slim (so if you have hosting there, they are telling people to move it).  So it is with sadness I watch a podcast network go under. When I went to their site I think I know why. Their content was horrible. Now in the 5 minutes on the site I went to their “Podcast Mastery” channel. Of the 6 shows listed only 2 had one episode published in 2008. Here is the list

The last one (Kick My Apps) had only ONE episode. How does a show get on a network with just one episode? Wasn't the idea to find the best shows, group them together, and the sell advertisements across all of them? Who would advertise where the majority of shows have “Podfaded.”

In the meantime I am DEADLY afraid of losing their show builder lite technology (that they they purchased from Gigavox). While the system had its flaws, it was the only one of its type that the average podcaster could afford (free). I've been saying they should've taken that system and CHARGED for it. They were using Amazon S3 for the back end, so it wouldn't take much to turn a profit. My hope is that Gigavox can now bring it back under their name when it used to work), and allow us to use it.

Now is podcasting dead? No. What we learned was:

There is no such thing as free hosting.
You can't stay in business if you don't charge for your service.
Content is king.
If you can't charge for it becuase its broken, fix it so you can.
If you need to sell advertising, you need a sales staff.

It should be interesting as other networks (Mevio) are using the same business model (only slightly adapted to be more slanted towards affiliate marketing instead of actual sales ads). However, in this model if people don't purchase the products, you don't make money.

My best to Lee and Doug – two really nice guys.

2009 should be fun to watch. Podcasting is not dead for those who pay to have their communal house built on good content and communication with their audience. It's still about relationships. You build the relationship with good content.

Tom Leykis on the Demise of Radio 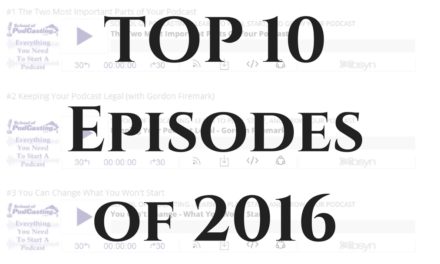 Jerry Seinfeld – Half the Time Nobody Got His Show